Despite the success of the current SOTA SSL algorithms, they are extremely computationally intensive and require significant training times. For instance, from our experience, training a WideResNet-28–2 (Zagoruyko & Komodakis, 2016) model on a CIFAR10 dataset with 4000 labels using the SOTA FixMatch (Sohn et al., 2020) algorithm for 500000 iterations takes around four days on a single RTX2080Ti GPU. The increased training time also implies increased energy consumption and an associated carbon footprint (Strubell et al., 2019). Furthermore, it is common to tune these SSL algorithms over a large set of hyper-parameters, which means that the training needs to be done hundreds and sometimes thousands of times. Below is an image, showing the compute costs of SSL algorithm FixMatch (Sohn et al., 2020) along with hyperparameter tuning.

SSL’s significant compute costs make it difficult to extend semi-supervised learning research at most universities and smaller companies. The first problem that we try address in RETRIEVE is:

Can we efficiently train a semi-supervised learning model on coresets of unlabeled data to achieve faster convergence and reduction in training time?

Furthermore, SSL algorithms enable us to achieve similar performance to supervised learning models by making better use of unlabeled data. However, in most real-life scenarios, the unlabeled data is directly mined from web sources. The relative ease of acquiring unlabeled data from web sources makes it very easy to accrue some out-of-distribution (OOD) examples or achieve an uneven representation of unlabeled samples belonging to different classes.

In the case where OOD data or class imbalance exists in the unlabeled set, can we robustly train an SSL model on coresets of unlabeled data to achieve similar performance to existing robust SSL methods while being significantly faster?

Given a labeled set D with n labeled data points, an unlabeled set U with m data points and a model with parameters θ, the loss function for many existing SSL algorithms can be written as:

where λ is the regularization coefficient for the unlabeled set loss. For Mean Teacher, VAT, MixMatch, the mask vector m is made up entirely of ones, whereas for FixMatch, m is confidence-thresholded binary vector, indicating whether to include an unlabeled data instance or not. Usually, the labeled set loss is cross-entropy loss for classification experiments and squared loss for regression experiments.

As shown in the pipeline figure, RETRIEVE trains the classifier model on the previously selected coreset for R epochs in a semi-supervised manner, and every R epochs, a new coreset is selected, and the process is repeated until the classifier model reaches convergence, or the required number of epochs is reached. Hence, as the model training progresses, the quality of the coreset selected by RETRIEVE improves.

The coreset selection problem of RETRIEVE for classifier model parameters θ is given as follows:

To solve the inner optimization problem efficiently, RETRIEVE adopts a one-step gradient approximation based optimization method similar to MAML (Finn et al., 2017). More specifically, RETRIEVE approximates the solution to the inner level problem by taking a single gradient step towards the descent direction of the loss function. The idea here is to jointly optimize the model parameters and the subset as the learning proceeds. After this approximation, the coreset selection optimization problem becomes:

Furthermore, If the labeled set loss function is cross-entropy loss, then the optimization problem given in above equation is an instance of cardinality constrained weakly submodular maximization problem.

To solve the optimization problem given in the equation above, we need to calculate the loss over the entire labeled set multiple times for each greedy iteration, making the entire greedy selection algorithm computationally expensive. Hence, to make the greedy selection algorithm efficient, we approximate the above equation by using the first two terms of it’s Taylor-series expansion. The resulting optimization problem solved at each greedy iteration after Taylor-series approximation can be given as follows:

In the above equation, S is the current subset, and at every greedy iteration, an element with the maximal dot product value between the currently labeled set loss gradient and the unlabeled element e loss gradient is selected and added to the existing subset S.

a. Performance of RETRIEVE in Traditional SSL scenario:

In the traditional SSL scenario, we compare the accuracy-efficiency tradeoff achieved by RETRIEVE with different subset selection approaches like CRAIG, Random. We compare the performance for different subset sizes of the unlabeled data: 10%, 20%, and 30% and for three representative SSL algorithms VAT, Mean-Teacher, and FixMatch. 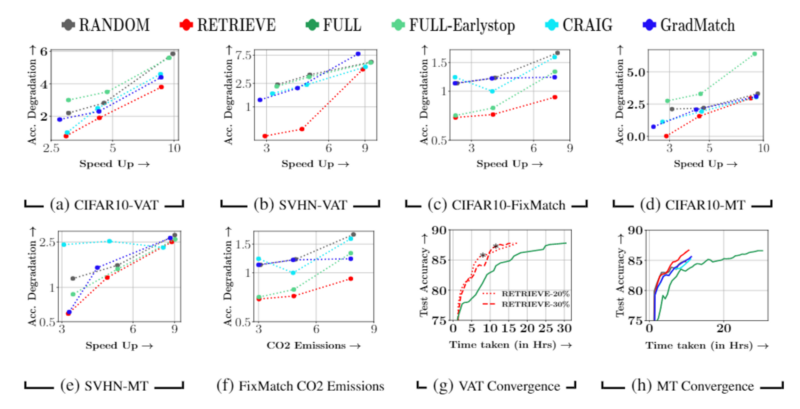 b. Performance of RETRIEVE in Robust SSL scenario:

Specifically, we see that in the traditional SSL setting, RETRIEVE consistently achieves close to 3x speedup with accuracy degradation of around 0.7%. RETRIEVE also achieves more than 4.2x speedup with a slightly higher accuracy degradation. Furthermore, when RETRIEVE is trained for more iterations, it can match the performance of original SSL algorithms while having a 2x speedup. RETRIEVE also consistently outperforms simple baselines like early stopping and random sampling in the traditional SSL setting.

This blog post introduced RETRIEVE, a discrete-continuous bi-level optimization-based coreset selection method for efficient and robust semi-supervised learning. In my opinion, the application of subset selection approaches for efficient learning is an area of research with tremendous potential. Because the reduced training times that subset selection strategies can achieve help reduce carbon footprint and training costs, getting us closer to Green AI (Schwartz et al., 2020). To that extent, RETRIEVE acts as a POC(proof of concept) to demonstrate the potential speed-ups and energy savings that can be achieved for existing SSL algorithms (specifically robust SSL algorithms) by simply training on informative unlabeled subsets.